Cultural meetings and mixtures of styles have become popular, but its not common that such a new feeling is found as the trio with the Swiss electric engineer and guitarist Matthias Grob, Bahian percussionist Giba Conceição.Sometimes, multi-instrumentalist Kal Venturi from the mountains of Rio de Janeirojoines in.

Since 2001, they work from influences like Pink Floyd, ambient music a Afro-Brazilian Rhythms with specific improvisation techniques. Additionally they interprete spiritually and socially moving songs of Kal and Lalado.

Using the Live Looping technology that Matthias developed, Gibamanages to play many of his multi cultural instruments simultaneously. Matthias creates bass, harmony and unusual sound textures on the guitar and extendedsolos of cries of joy and admiration for all that grows in this world...

The electronic repetition maintains the organic sound of the instruments, but brings the intensity and repetitive power of electronic music.

The result is free music, tribal, sometimes experimental or funny, sometimes from outer worlds, generally relaxing and inspiring, simple enough to sing along. 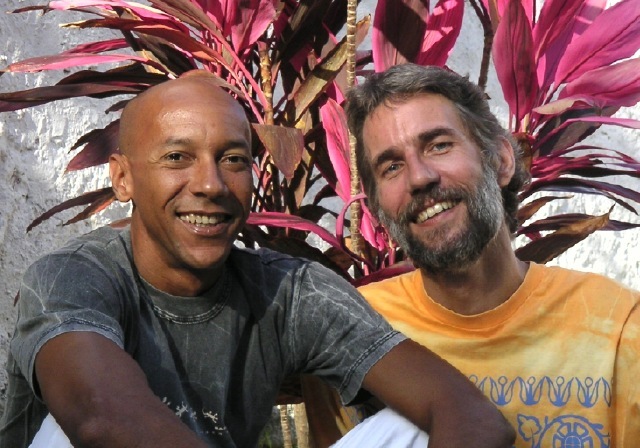 live recordings that represent what we can do on stage

3 pieces of Matthias last CD happened with Giba, one of them also Kal.

What is Live Looping Music?

Live Looping Music has roots in the experimental studios of the fifties, but only in 1992, Matthias Grob created Echoplex DP, the first and still best tool for LiveLooping Music. It allows to compose music on stage, repeating just played rhythmic and harmonic patterns and variations. The unit does not play alone, but records the musician on the spot. So there is nothing preprogrammed, compositions are interpreted live and its a perfect tool to support improvisations.

There must be about 10'000 musicians in the world and about 30 in Brazil working mainly with Live Looping. Very few use the technology in bands...