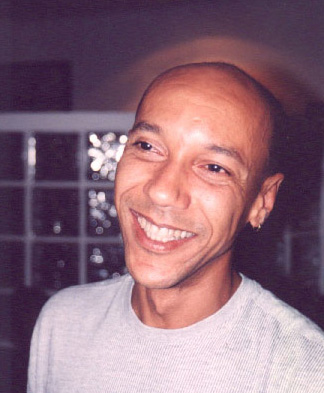 Bahia is famous for its mixture of races that generated a joyfuland creative people deeply engaged in the mysticism of Candomble, theBrazilian syncretism of African and Catholic traditions. The "Baiano"possesses a singular zest for life that is inextricably linked withand expressed through music and dance. It is not a surprise thatBahia has produced some of the most recognized artistic talents, bothnationally and internationally.

Giba Conceição is one of these people.

Born in a Bahia with a gift for music, Giba has been developinghis rhythmic creativity since he was a child.

Now counted among the top Brasilian percussionists, Giba launchedhis professional career in 1986 and in 1987 won the TroféuCaymmi 'Best New Musician'.

His work is rooted in the deep mysticism of Candomblé&endash the Brazilian syncretism of African and Catholic traditions&endash and he specialises in the historical research and technicalmastery of the Cuíca.

Throughout 1994 Giba toured extensively in Europe and the Americaswith Margareth Menezes and has played and recorded with wealthof Brasilian talent including Gilberto Gil,Gerônimo and Paulinho da Viola.

During his formative years Giba co-founded the Samba groups 'SambaFama' and 'Samba Sexta Som' as well as playing with instrumentalbands 'Grupo Pulsa', 'Auto Reverse' and 'Ilu Bata' and Carnivalbands.

In 1996 he was invited to play with the band Zeed Resolution forthe tour of Jimmy Cliff.

In 2000 Giba appeared as actor/percussionist in the FOX film'Sabor Da Paixão' (The Woman on Top) directed by Fina Torresand starring Penelope Cruz and Murilo Benicio with a soundtrack byTom Jobim.

In 2001, having seen his appearance in the film, Angolanpercussionist and producer Victor Gama tracked Giba down in Bahia, toinvite him to take part in his important research and recordingproject Odantalan. Theproject which aimed to access the cultural and spiritual heritage byuniting master percussionists from the African Diaspora.
The project took place in Luanda in March&endashApril 2002 andbrought together Victor Gama (Angola), Kituxy (Angola), HugoCandelário (Colombia), Felipe Villamil (Cuba) and GibaConceição (Brasil), while Colombian anthropolist AnaArango and Cuban Art Historian Barbaro Martínez-Ruízresearched and documented the event, which is now available in a bookand on the Odantalan CD.
The project was a seminal experience for Giba, who has long beeninterested in researching percussive processes and investigating theroots of Afro-Brasilian music. 'As a percussionist, going to Africais like returning to your mother's womb' he said.

In 2001 Giba was invited to act as Assistant to the MusicalDirector of the Igreja do Rosario Dos Pretos (BLACK CHURCH)and the Candomble orchestra 'Grupo Ofa'.

Giba has also worked as a percussion teacher at Carlinhos BrownsPracatum School of Percussion at Candeal de Brotas(2000-2002), and has hosted workshops in Bahia, XXXX and New York,exploring the four aspects of Brasilian percussion &endashCandomblé, popular percussion, Capoeira and Afro-bloc.

He is currently developing a project of Live Looping Music, with Swiss guitarist and inventor Matthias Grob in Bahia. Its about a new kind of music that grows out of the use of electronics for the multiplication of the live played acoustic instruments. So far few percussionists in the world dominate this tecnique...
This is how it sounds sofar